(If I can help you purchase a Harmonica?)

“Hohner” are arguably the biggest name in harmonicas and the oldest manufacturer in the world. Hohner have a reputation for quality instruments that are used by the most renowned harmonica players around the world today.  They also come in quantities of more than one shown in the picture below. 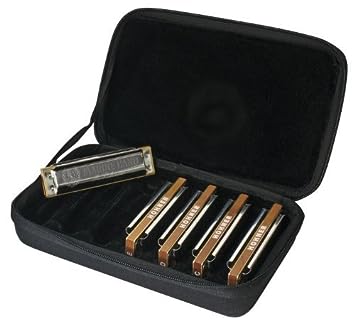 37 customer reviews
In Stock.
Ships from and sold by Amazon.com.
Want it tomorrow, May 15? Order within 4 hrs 47 mins and choose One-Day Shipping at checkout. Details

Marine Band is the base model of the line technically named the Marine Band 1896/20 for the year it was introduced and the twenty reeds it possesses it has been the basis of several Hohner’s harmonicas over the years. It also has some tuning variations like the 1896N (natural minor key) and the 1896H (harmonica minor key). The Marine Band has been hohner’s most popular model of harmonica for generations. made in Germany on a wood comb, most blues and rock artists play a Marine Band such as (Bob Dylan), John Lennon, Bruce Springsteen, Little Walter and Neil Young.

The Special 20 (#560) was introduced in the mid 1970’s it has the same reeds as a Marine Band but it has a plastic comb instead of a wooden comb rounded edges on the cover plates.  It was the first Hohner harmonica to have a plastic comb which not only made the instrument airtight but also eliminated the swelling which changes the pitch of the harmonica  wood combs swell in weather changes and moisture their usually played inside made in Germany, this model quickly became the preferred choice of many rock and blues players. Now most harmonicas being manufactured from all companies are based upon the Special 20. It’s most noted for Harmonica Player John Popper. Like the Marine Band 1896, the Special 20 also has tuning variations available, like the #560C in country styled tuning, and the # 560N in natural minor.

The Marine Band Deluxe has all the features of the original Marine band with tighter construction and a new cover design which creates a greater volume.

The Marine Band Crossover also features the same reeds, but is made on a bamboo comb that is water repellent.

The Marine Band Thunderbird is a model of low and supper low pitched 10-hole diatonic harmonicas that were introduced in 2011. It possesses a bamboo comb like the Crossover and a conical shaped lower cover plate. Designed by harmonica player and customizer (Joe Filsko) this helps reduce any rattle caused by the low frequency tone produced by the reeds. It’s available in low major keys A through F, as well as low B-flat and E-flat, and double-low F.

Have you ever seen a hohner Marine Band harmonica?

Have you ever seen a hohner Special 20?

Have you ever seen a Marine Band Deluxe?

Have you ever seen a marine band Crossover?

Have you ever played any of these harmonicas?

Have you ever owned any of these harmonicas?

I would love to get your feedback on this please leave any comments or questions below and I will reply as soon as possible.

Thank you for visiting my website please come back   in the future as I’m always adding new and exciting content!

Have a blessed day!

Check out my "About Me" page here!